Artwork of A Garland of Forgotten Goddesses, Part 10 of 12

This week I am proud to introduce the goddess Tvaritā, whose chapter I contributed to A Garland of Forgotten Goddesses. She typifies the “forgotten goddess” motif and inspired the book, for she is a goddess who at one time was the focus of her own extensive Tantric scripture, the Trottala (c.8th or 9th century). Competing goddess traditions, such as the cult of Tripurasundarī, incorporated Tvaritā as an attendant of their main goddess, and slowly Tvaritā faded from view. While a few temples to her can still be found in the northern Deccan region of India, her most notable survival in her adaptation as the royal goddess of the former kings of Nepal, Taleju Bhavani.

To my knowledge no image of Tvaritā from her heyday survives, so the artist created the drawing below on the basis of her description in the Sanskrit work selected for translation. 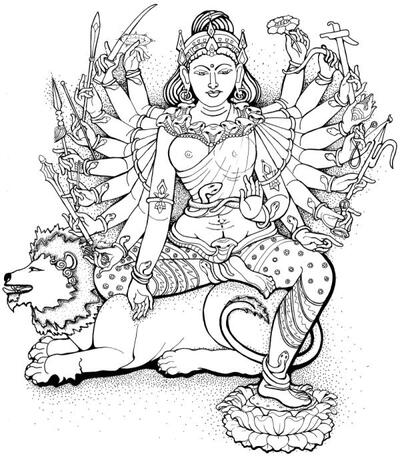 The artist is Laura Santi, and she created each of the images based on descriptions of the goddess in each story. None of these stories were available in English until now. A high quality digital download of the drawing is available at the artist’s Etsy page.

The passage below is the core of the narrative of Tvaritā’s origin. It is mysterious, insofar as the meaning of the euphemistic terms in quotation marks is subject to interpretation. The tension highlighted in the passage is resolved in the larger tale, but I will not spoil it for those who plan to read the book.

“Once upon a time, I issued forth from my body a very horrible, unrivaled form of myself known as Bhairava. From his esoteric practices (yoga) fierce-­looking yoginīs came into being. They were numerous, indeed innumerable, and they craved blood, flesh, and liquor. Never sated, they are always famished, terrible, and frightful to behold. I wanted to test their knowledge gained from the esoteric practices. They urged me to serve as a ‘sacrificial male,’ respectfully requesting, ‘O Lord of the gods, please take part in our “rice pudding” rituals in the maṇḍala.’ I said, ‘I will do it,’ and I went to the summit of Mt. Meru. There, I fashioned the Diamond Rod maṇḍala with five colored powders. In the middle I made a lotus with eight petals, shining with a yellow central receptacle. I put Diamond mantras in the four cardinal directions, and enclosed diamond mantras in the intermediate directions. I made doors and pathways there, and an exit at the southern gate. There I stationed myself in the middle of the lotus, which was full of the strength of feminine energy. I meditated on the supreme form of that feminine energy which is immovable, supremely steadfast.

“At that moment, on the slopes of Mt. Kailash, Pārvatī asked Śiva’s servant Nandi, ‘Where is the blessed lord Rudra?’ Nandi answered, ‘He is serving as a sacrificial male, O goddess. The yoginīs asked him to take part in their “rice pudding” rituals, and he is standing in the mandala.’ Then Pārvatī became enraged, blazing with anger like millions of lightning bolts. Instantly (tvaritaṃ) she uttered the Tvaritā spell, consisting of three-­times-­three seed syllables. She blazed like ball lightning, pervading the whole world of moving and nonmoving things with untold billions of light beams pulsing out to the ten directions. She paralyzed the gods, Brahmā and so on, with a fiery ball of light.

“They cried out in desperation, and said, ‘Save us, O goddess, beloved of Śiva!’ They came and fell at her feet and lauded her with excellent hymns of praise.

Artwork of A Garland of Forgotten Goddesses, Part 10 of 12

Biting the snake that bites you